The NHS has published some short-term and long-term risks of alcohol misuse.

Short-term risks could include:

As well as causing serious health problems, long-term alcohol misuse can lead to social problems, such as unemployment, divorce, domestic abuse and homelessness.

Soon after drinking alcohol, your brain processes slow down and your memory can be impaired. After large quantities of alcohol, the brain can stop recording into the ‘memory store’.

That’s why you can wake up the next day with a ‘blank’ about what you said or did and even where you were. This short-term memory failure or ‘black out’ doesn’t mean that brain cells have been damaged, but frequent heavy sessions can damage the brain because of alcohol’s effect on brain chemistry and processes.

Drinking heavily over a long period of time can also have long-term effects on memory. Even on days when you don’t drink any alcohol, recalling what you did yesterday, or even where you have been earlier that day, become difficult.

Alcohol is an obvious depressive which can have health implications well beyond the spiritual hangover that many of us have experienced after a night on the bevy. Find out more about these issues and the impact of alcohol on mental health by clicking here.

Did you know that men and women shouldn’t drink more than 14 units per week?

Mental health seems to be a hot topic in the media at the moment, but what role does alcohol have to play in this issue? This page tells you more.

Alcohol is linked to suicide, self-harm and psychosis.

Alcohol can actually increase anxiety and stress rather than reduce it.

If you are concerned about someones mental health and displays of aggression click here.

Ever wondered why people can become aggressive? Because of the reduced levels of Serotonin our perception of a situation narrows, putting the spotlight on the threat in the environment that cuts out the neutral information.

For example, our partner talking to an attractive man at the bar. You may fail to see that it is actually the barman and that he is talking to others.

Does this give meaning to the word blind drunk?

Chicken before the egg

Some drink to relieve the pressures of anxiety and depression.

Others drink to relieve the anxiety and pressure caused from drinking.

Symptoms of depression in 2012-2015 (combined), by age and sex, and by area deprivation

Alcohol can make people lose their inhibitions and behave impulsively, so it can lead to actions they might not otherwise have taken – including self-harm and suicide[4].

According to the NHS in Scotland, more than half of people who ended up in hospital because they’d deliberately injured themselves said they’ve drunk alcohol immediately before or while doing it.  27% of men and 19% of women gave alcohol as the reason for self-harming.

Extreme levels of drinking (such as more than 30 units per day for several weeks) can occasionally cause ‘psychosis’. It’s a severe mental illness where hallucinations and delusions of persecution develop. Psychotic symptoms can also occur when very heavy drinkers suddenly stop drinking and develop a condition known as ‘delirium tremens’ – symptoms include body tremors and confusion.

If you’d like more information on the effects of alcohol and mental health check out Drinkaware* & Royal College of Psychiatrists.

*DRiNKLiNK has no affiliation with Drinkaware

Some of the terms associated with alcoholism aren’t too complimentary – Like loser, thief, jaikie, lowlife, scrounger, tramp, liar. It can be a lot to take if you are the loved one of someone with an alcohol dependency.

We will go on to discuss the effect this can have on the family but meantime, check out our myth busters page here to pick up the facts that will help you to challenge some of these terms and educate those who are misinformed.

Stigma is defined in the Oxford dictionary as a mark of disgrace associated with a particular circumstance, quality, or person.

The impact on the family:

Families and friends often struggle when it comes to the stigma associated with alcohol dependency. A lot of this stigma stems from misunderstandings around and perceptions of the term alcoholic.

Alcohol dependency is long associated with mental heath, however someone branding themselves as having an alcohol problem will receive a very different response to someone saying they have a mental health problem.

“The impact of a person’s alcohol use can have a negative impact on the family member’s social life, leading to increasing isolation, which may be exacerbated by the feelings of guilt and shame that families often feel.”

This can lead to:

Why is this an issue?

In its latest Annual Review of its 2010 Drug Strategy, the Government reaffirmed its commitment to challenging the stigma associated with dependence which it recognises as a barrier to an individual’s successful recovery.

If you can relate to this issue, you can find out more on the adfam website.

It is sometimes hard to tell if you are drinking more than is good for you. Many people drink more than they think, especially when drinking at home.

Alcohol, drugs and other substances have a strongly negative effect on the brain and the body, impairing judgement and concentration and often putting the abuser and everyone they come in contact at risk.

How Many People Are Affected?

What Are The Symptoms of FASD?

The only way to prevent FASD is to not drink alcohol at all during pregnancy.

Consult your doctor if you suspect you or someone you know may be affected.

Alcohol is a drug

Alcohol is a legal drug when consumed according to law. In Scotland, the drug is seen as an integral part of Scottish life; used to celebrate, commiserate and socialise.

It’s also a toxic substance that can create dependence and causes serious health and social problems. Drinking too much, too often, increases the risk of cancer and liver disease, being involved in an accident, being a victim or perpetrator of crime, experiencing family breakdown, and losing employment.

Often, it’s people other than the drinker who feel the effects the most: children, family, friends, colleagues and those working in front line services like the NHS and police. 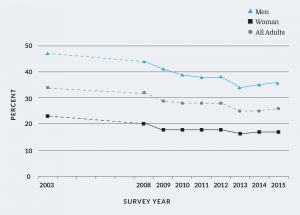 Trends from 2003 to 2015 in self-reported usual weekly alcohol consumption are presented in Table 4.1 by sex for adults aged 16 and over.

For men, levels of hazardous / harmful drinking were similar among the three quintiles with the highest income (40-46%) with a significantly lower level among the two lowest income quintiles (25% and 26%). 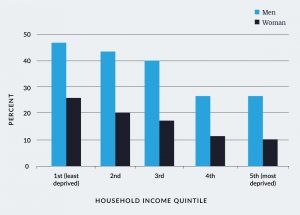 An estimated 17 million working days are lost each year by people missing work due to the effects of alcohol.

Surprised? Visit out Facebook page to tell us what you think.