Here are some of the myths that you asked us to bust.

Myths about alcohol and society

Alcoholics don’t contribute to society and rely on benefits.

The office of national statistics issued a report on alcohol misuse by employment. This is what they found. 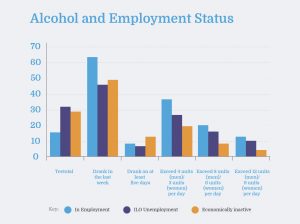 As you can see, those in employment are regularly drinking more frequently and more heavily than those who are unemployed.

Only low-income households are affected by alcohol misuse.

As you can see by the table above, this isn’t strictly accurate. In terms of numbers, low income households aren’t necessarily impacted the most.

But in a way, you are correct though. A new study, published in The Lancet Public Health and led by the University of Glasgow has found that there is a marked link between socioeconomic status and the harm caused by drinking alcohol excessively.

The study found that although increased consumption was associated with harm in all groups of people, it was disproportionately harmful for the poorest in society.

Everyone drinks. It is a way of life.

Actually, this isn’t the case. Alcohol consumption is actually a declining trend. The percentage of adults reporting that they do not drink alcohol increased significantly from 11% in 2003 to 16% in 2013, and has settled at that level since, according to the Scottish Government.

Scotland’s relationship with alcohol is having a devastating affect on our community and families. According to a recent report by the BBC, figures show an average of 22 people a week died from alcohol-related causes in Scotland in 2015. The figure is 54% higher than in England and Wales. 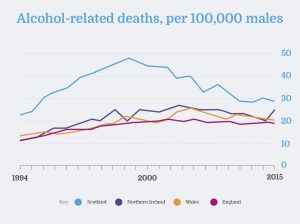 The Only Way to Get Better is to Hit “Rock Bottom”

This is a dangerous myth as it gives the impression of time. There is no guarantee that your body will actually take you to rock bottom.

You can seek help at any stage in your drinking – whether it’s the first time you binge drink or you’ve been drinking habitually for 25 years. There’s no line you have to cross before it becomes “bad enough”. You can and should seek treatment the moment you feel you need help.

Also, remember that everyone’s rock bottom is different. For some, a hangover or missing work is enough to stimulate a life change. Others, may see rock bottom as homelessness, unemployment, domestic abuse … we are all different. Do what is right for you.

Rehab is the Magic Cure.

Participating in an organised treatment program can be extraordinarily beneficial for someone suffering from alcoholism. While in treatment alcoholics have the opportunity to develop healthy coping mechanisms and network with others seeking sobriety. But treatment programs aren’t a one-stop shop to fix alcoholism. Alcoholism is a chronic disease and maintaining sobriety will be a lifelong journey. Continuously tending to your recovery is a rewarding process because you will be building lifelong relationships and a gratifying life outside of alcoholism.

The best reaction to an addiction is just to remove the problem. Take alcohol from the house and take away their bank cards.

This can be potentially very dangerous. Like going on a diet, it’s always advised to talk to a doctor about how to wean yourself off alcohol.

Getting Sober is Impossible.

Some people may feel like they’re too far gone in their disease to get help. This is simply NOT true. At any age or stage in your alcoholism, you can successfully seek sobriety. Once you enter treatment, or start your recovery journey, you may feel overwhelmed. That’s normal, but it’s important to remember that you have the ability to change your life and sobriety is within your reach.

Myths about life after alcohol

A lot of people mistakenly assume that after they get sober, life will be boring. Nothing could be further from the truth. In fact, the vibrancy and support that can be found in the recovery community is unlike any other. Clearing your mind of the fog of your addiction opens it up to so much more. Now is the time to discover or regain beloved hobbies and restore meaningful relationships. Most people who are seeking sobriety report that they have renewed appreciation for life and making the most of their time.

What myths would you like us to tackle? Email info@drinklink.org or visit us on Facebook and we will do our best to confirm if this is a myth or a fact.